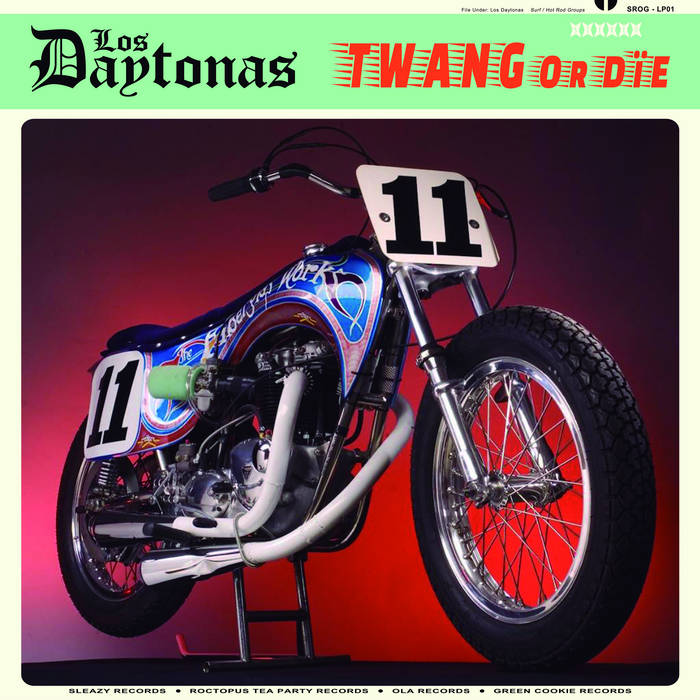 Los Daytonas are a genuine instrumental surf band from Madrid (Spain) established in 1997. Their new LP “Twang Or Die” includes 8 original tunes plus 3 covers on a 180gr. black vinyl.
Although this is a classic instrumental surf album, you will find a cool mix of styles such as: Hot Rod (Big Rod), Spy (La Tapadera), Western (Mátalos Y Vuelve) and various Exotica inspired tracks!!
The album was recorded live in one of the most truly retro studios in Spain: Big Cheff Recording Service; using 40's, 50's & 60's equipment & backline. Mastered at Lightning Recorders, Berlin. Both running through a 100% vintage analogue processing
Produced by Mike Medianoche & Los Daytonas, this recording has plenty of exciting arrangements using castanets, great choirs, tenor sax, organ, vibraphone, marimba & lots of percussion..., in order to achieve a very dynamic & unique listening experience
If you enjoy the classic instro twangy sounds from the late 50's to the mid 60's era, you shouldn't miss this BOSS band from Spain!!

Race engine sounds on “Big Rod” excerpt from the album: “The Big Sounds of the Dragsters I” (Capitol Records, 1963).

Green Cookie is a Greek surf label, Los Daytonas are a Spanish band that was founded in 1997. Based on this album (at least their fifth release), I would not describe it as a surf but as an all-round instrumental group.

Yes, Impostor is blubbersurf and Latinia is a surf cover of The Sentinels from 1962, but the other nine tracks are different: Abd El-Krim is a twangy version of The Shadows with a lot of percussion and Borracho is reminiscent of The Fireballs but turns out to be the Spanish group Los Brincos from 1964, and the short notes and the percussion that characterize those two songs prove to be the keywords of this record that combines many influences.

Spaghetti western! Spy! hot rod! El Loner and Mátalos Y Vuelve are western inspired, La Tapadera could have been in a James Bond movie (which reminds us: Sean Connery is the real James Bond, the others are actors!) and Kona Lei pulls with even more percussion (on on this album, castanets, vibraphone and marimba pass through) an unadulterated can of Tabou exotica. Even more variation: Big Rod (a cover of Big Cock by the Spanish rock band Sex Museum from 1987) couples that short twang with a guest organ and racing sounds from the Capitol LP The Big Sounds Of The Drags from 1963, and the guest -tenor sax and the voices in Oh Gregoria give a frolic dinner effect.

The album was recorded in the vintage Big Cheff Recording Service studio in their hometown Madrid and mastered by Axel Praefcke at Lightning Recorders in Berlin, resulting in an album with a very nice clear sound whose calm character is a breath of fresh air. Bravo and keep going, that's how our schoolmaster used to write on our tasks. Remarkable: this is not out on CD but only on vinyl LP in a limited edition of only 300 pieces!