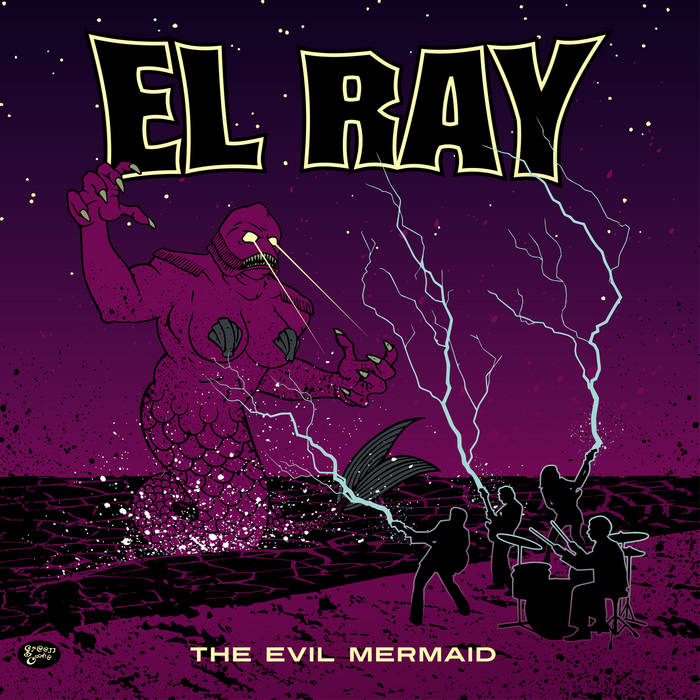 Hunter King Wow! El Ray's last LP didn't have the oomph I felt from some of their older material but this has all the speed and power I ever wanted from them. So many little touches that tweak great songs into incredible ones and with top-notch production bringing it together. They can do a good slow, sleazy track as well as a speedy one, like on the genius Pyramids/Link Wray mashup Double Penetration Favorite track: El Raynia (Uber Alles).

Copenhagen, Denmark. Not the most likely place for a band to emerge with the obvious surfing pedigree of El Ray. The band show a versatility of sound and an ear for catchy, toe tapping melody which takes them beyond the cliches that can often be associated with the surfing genre. Combining a fresh, modern style with a healthy nod to the past, 'surf with a twist' El Ray have managed to achieve a new, classic sound.

Their 3 full length releases, the two 10" inches and the singles are known to have been recorded during blizzards, far far away from the sunny side of life and Californian lifestyle. Whatever it is, El Ray is the band that keeps on giving that goosebumbing and hair raising Instro-surf!

El Ray's merits has proved the band to be a serious contender in writing and performing modern instrumentals that would make your hifi-stereo A GO-GO!! The 4 Scandinavian Instro-surfers have build their own brand within the surfing circles since 2001. Mixing their dynamic, cool punked up surf tunes with a huge spoonful of rock'n'roll and a tad indie to make everybody happy when "it's better to be surf than sorry".

El Ray are always ready to invite their audience to ride the wild waves of surf in clubs all over.

Better Surf Than Sorry - it's time to join the party!

Those Damn Kids – possibly the BEST surf song of 2014!!! It is truly a masterpiece! Opens up with a “Calhoun Surf”-sounding arpeggio, and then it goes into a supremely infectious verse which just keeps building and building. Jesper plays the first half of the verse and then switches to a driving rhythm guitar part while Lars picks up the melody and escalates the intensity with each run-through, culminating in Lars playing some beautiful, ingenious semitone bends and double-stops the third time through, which never fail to give me the shivers. Some really nice harmony and counterpoint between the two guitars in the bridge and the coda, too. Really, as far as I’m concerned, surf doesn’t get any better than this. On a scale of 0-10, this one goes to 11!!!

Three Kinds of Meat – inspired by a breakfast at a SoCal diner with Big Tiki Dude, who requested bacon, sausage AND ham with his breakfast, this is a horror-themed track (completely with occasional screams) that’s probably the closest El Ray get here to sounding like the material from their first two albums. Once again, some truly inspired guitar interplay, and a coming-out-of-nowhere key change and bridge towards the end.

The Peep Show – a dark, ominous track that seems like a commentary on the creepiness and sleaziness of strip clubs.

ElRaynia Uber Alles – Holy crap! El Ray take the classic Dead Kennedys’ track “California Uber Alles” and turn it into an amazingly effective surf track as only they could! A very fast and high-energy track with tight playing and ingenious rearranging, the title change is perfectly deserved as the song is now just as much El Ray’s as it is the Dead Kennedys’ - they’ve truly made it their own! (I believe they worked this one up for their California tour, and we can only be grateful that they decided to record it, too.)

Justin Case – You gotta love the title! A fast surf track with some great double-picking and a dark vibe, augmented by an amazing Hammond organ which works surprisingly well. Love the bridge with the fake ending – when the kick drum leads into another verse, there’s a real sense of tension-resolution and relief. Really, you’ve got to be 1) an accomplished musician and 2) seriously damn talented to be able to write a song like this! Impressive and visceral.

Double Penetration – a slower variation on Link Wray’s “I’m Branded” riff, with HUGE attitude and balls, and a verse that gets increasingly ‘mental’ and ‘outside’ as the song proceeds, Jesper and Lars trading back and forth on verses. The bridge gets intense, with some exaggerated surfy glissandos and snare rolls, and just when you think the song is going to go into a fast section, they bring it back down to the grinding riff. So cool….

All in all, a stunning piece of work and for me, along with the new Phantom Four and the Derangers albums, the soundtrack of the summer of 2014. And it’s been a marvelous summer so far, no doubt more than just partly due to this amazing music! Cannot recommend this highly enough – get it NOW! You really won’t be sorry!

El Ray from Denmark is a pure surf band (and in style has nothing to do with the phonetically related L(ink) Wray) that started traditional but evolved over the years into contemporary modern: loud, fast, solid and with a touch of punk (and very occasionally with an organ) but still with respect for the heritage, growing into a surf band that made soundscapes rather than funny melodies, at least that's how we hear it on their compilation Highwave To Hell 2001-2006.

This new vinyl 10-inch is a synthesis of the diverse styles that El Ray explored in the past with songs that hark back to the big bang such as the fast Those Damn Kids, the quieter Den Shaker or the spooky, cheered up with horror screams, Experiment In Terror-alike Three Kinds Of Meat. The soundscapes can be heard in The Peep Show, the speck of punk is incorporated into the roaring chorus of the “The Dead Kennedys-inspired” El Raynia (Uber Alles). We hear a "thicker" layered sound in Justin Case and the heavy slow grinding Double Penetration ("inspired by The Pyramids"), the whole of course drenched with masses of razor-sharp reverb. Those who already liked El Ray in the past will certainly not be disappointed, and because this is currently only available on translucent purple vinyl on only 300 pieces (+ free download), it is guaranteed to be a collector's item.