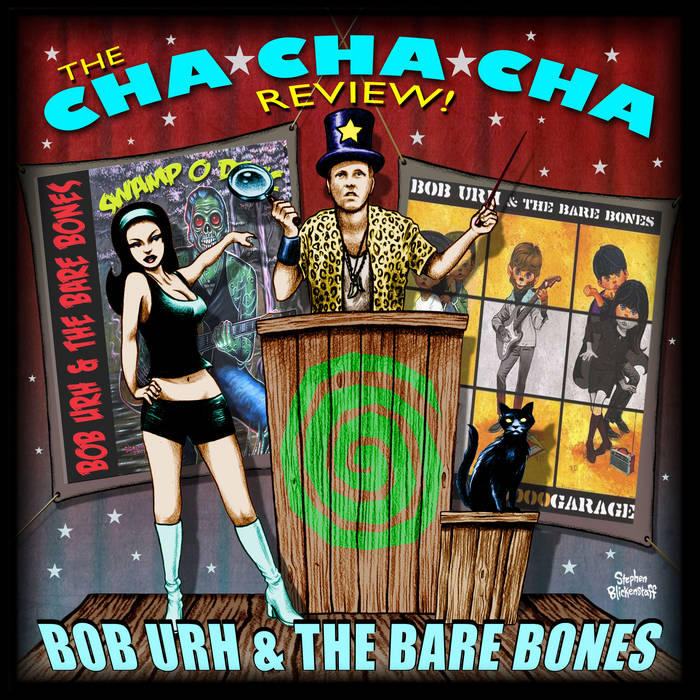 Bob Urh, of the erstwhile psych-garage masters Ultra 5, has released his new album: a deep dive into the sounds of the late ’50s and early ‘60s. A seriously lo-fi job with minimal instrumentation, these songs sound like they were performed in a 1x1m booth and recorded on a tape machine that happened to be lying about in the room next door! Psychobilly, blues, garage and a plethora of further influences permeate this album whose every note seems to emit authenticity as well as an indispensable sense of healthy paranoia, aided by a sublime lack of sophistication in the instruments and recording equipment departments. Hell sounds deadly, as garage tracks go, and is free of the genre’s sonic clichés; While Soda Pop bears the traces of Floyd’s schizophrenic masterwork Pow r Toch! Bob Urh’s The Cha Cha Cha Review is a musical path that may be hard to tread and whose outcome is uncertain; yet it is for this very reason that its genius shines all the more brightly. Peace Frog / Gew-Gaw fanzine (GR)

I was born under a bad sign on just another grey day in Cleveland, Ohio, 1963. Motown was big then so maybe “love child” was blasting through a tiny speaker coming from an AM radio? The first single I bought was “green tambourine” by the Lemon Pipers and I had a small 45 player that my mom says I used to dance around -dressed like a Beatle ! Next thing that caught my attention was “wipe-out,” and then a lot of county music like Hank Williams, Conway Twitty and Lorretta Lynn because of two hillbilly bars my family owned at this time. A few years later we were all listing to the Raspberries and the Outsiders. Then punk hit with the Dead Boys and that was it for me -I loved the bands that were playing in Akron and Kent, Ohio at this time, so I would make trips to these clubs to see the bands that made up the early punk scene there and would take a lot of pictures and hang out.

Things were getting out of control in my life in Cleveland so I left and went to Kent State university where I met the future other RAGGED BAGS at a place they ran called Garbage Inc., very democratic place, only 50 cents to enter and anybody could play – not just punk bands, but bands that couldn’t get gigs because of there more arty music and image. They also sold buttons with fresh food in them so you could watch it rot later!!! It was that kind of abstract stuff and tons of self published books of writing. I was in heaven !! I escaped death in Cleveland and found a new home were I was learning/ working with new friends.

I did my first gig in Cleveland at a punk place called the Lakefront. We did a lot of improving quickly and did a 12 track recording and a filmmaker made a short movie about the band that had a great premier on Kent State campus. A lot of speed and gigs, as well as me having an attack of bells palsy, made me and the band more volatile. And at the point when I thought I wasn’t happy but I should have been, I quit and moved to NYC, gave up playing forever and sold all my stuff except for my Vox tornado that Keith Busch sold me when in the Bags.

After seeing Richard Hell read some poetry in Chinatown and being a huge fan of Jim Carroll’s “I write your name,” I decided to start playing again and formed a loose 2 piece that got together for some weeks under the name CREAM COLORED BABYS. Also started working on a tune that would end up in the ULTRA 5 repertoire soon, called ALISTER’S TIME .

Speaking of the ULTRA 5, I worked with a couple musicians during the day and they knew of a new club in Brooklyn opening and needed bands and the drummer Bob Osuna asked if I would do it IF I had a band and I said yes IF, but I don’t. The next day he came to work and says we’re booked! What? We added John Chua on bass and my girlfriend Ariane Root on keyboard. This lineup would change many times over the years (10) but it was always BOB, ARIANE, and TARA with various drummers (14). The band began with three guys and one girl and ended with three girls and one guy with PIKI SOUL on drums !!!

We recorded and toured a lot from 85-95 then things fell apart due to the usual reasons. In 1992 I started the LONE WOLVES and pursued this till 94. 1995 I decided to change direction with a new band in the same vain as the STOOGES/SAINTS kind of direction called ZERO CHILD named after a ULTRA 5 song with Tara McMunn on bass and David Ensminger on drums. And tons of wha wha ! We played Mexico City as well as Coney Island, USA and a lot of gigs in every cool dive in NYC and had two cd’s, as well as tons of comp tracks, released!

After 20 years of playing in “normal ” format bands 4 or 5 piece units with no space to grow and a lot of songs I wrote over the years that would be great finished, but were not band unit type tracks, I formed the BARE BONES! This is a loose band with ever changing lineup depending what’s needed or wanted. From single solo acoustic subterranean blues a go go, to a six-piece like on hoodoo garage when we recorded it in NYC at the Funhouse! Watch out for a new cd called “Swamp O Delic” by BOB URH AND THE BARE BONES on Green Cookie records and one called “Play Loud N FuzzyU” by ZERO CHILD on Basement Blues records !!!!