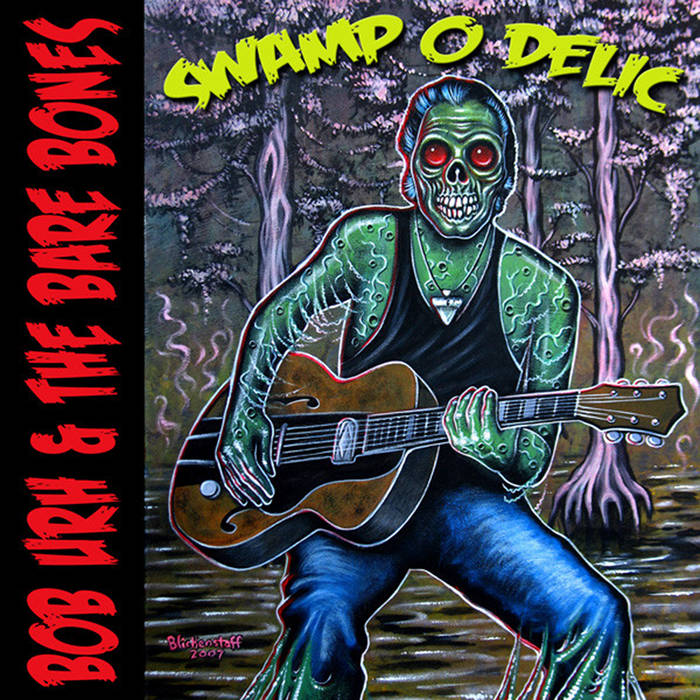 Once in a while I come across a disc I was intended to review but fell through the cracks due to various reasons (work, time constraints, etc). Imagine my surprise when I was organizing some CDs and found this disc – so I put it on. The most recent (to the best of my knowledge) Bob Urh disc is a collection of minimalist bluesy rock and folk featuring mostly straight-ahead guitars and basic, simple percussion though occasionally weaving in elements of noise and psychedelia at moments. The overall feel in these songs builds a sometimes dark album with a crude vibe evoking swamps, zombies, failed relationships, and the like throughout. While Swamp O Delic isn’t a disc that fits easily into one category, this is a listenable, if sometimes unsettling, aural ride. I’m glad I finally found this but I wish I could’ve gotten to this sooner.

--- Reviewed by Boone Stigall (The Trouble With Normal).

The Bare Bones are on the cover, but they don't participate. Because solo can be even more minimalist and rattle for Bob Urh, the man who begins his musical explorations where The Castanets and Bonnie 'Prince' Billy drop out. Really no note is played straight on Swamp O Delic. And all that skewed music is also covered under a thick layer of noise.
But listen to it often, because then what at first seemed laughably amateurish, turns out to be of an unprecedented desolate beauty.
Bob Urh has the blues like no other and the shattered state of his soul can only be captured in shattered music. Urh can't play and sing 'There She Is' and 'Ramblin' Man' any better, because he is too consumed with soul pain. In 'Dark Punk Maya' and 'The Bones Walk' it is as if the corpse of Lux Interior has risen from his grave to play a few more filthy pieces of voodoo blues, as far as his already rotting fingers allow.
Admittedly, accessible is different. But those who like to have their music served as raw and primitive as possible cannot ignore Swamp O Delic.