by The Surf Raiders 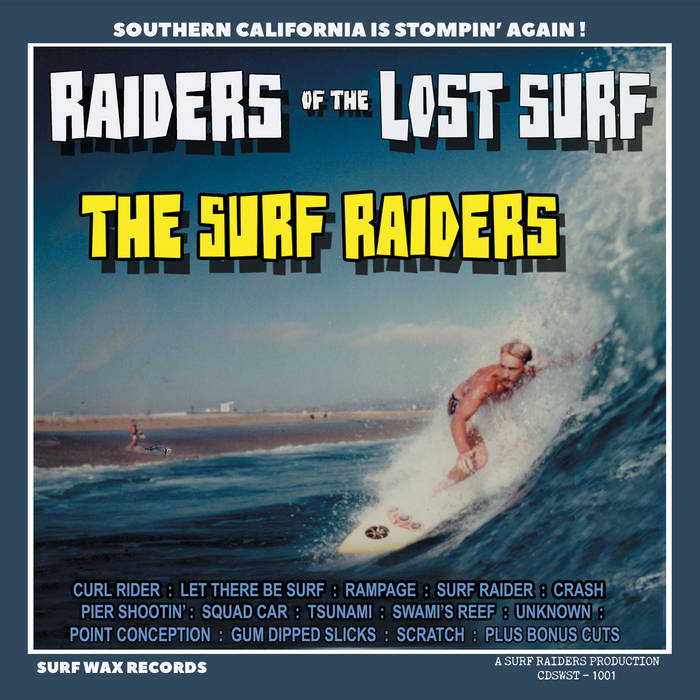 Thanks to Green Cookie Records, a whole new generation will have access to two of the most important Surf music releases of the early 80s!
At a time when New Wave, Heavy Metal and Pop music dominated, The Surf Raiders did the Surfer's Stomp to the beat of their own drums and were one of only a handful of bands carrying the torch of traditional Surf music.
Bob Dalley is not only a living legend for writing one of the essential publications on First Wave Surf music, Surfin' Guitars: Instrumental Surf Bands Of The Sixties, but also for putting his knowledge to practical use and leading one of the premiere traditional Surf bands of the early 80s.
Raiders Of The Lost Surf and Surf Bound helped establish The Surf Raiders as one of the few prime examples of traditional Surf music in the early 80s. They are absolutely essential for any true Surf fan.

In November of 1979 while living in Azusa, California I had an idea of trying to put a group together. I thought it would be neat to find a bunch of guys who had a common interest, instrumental surf music and wanted to play it. Through recording collecting, I met Neal Kuzee who also played guitar. Neal showed me a book written by John Blair called The Illustrated Discography of Surf Music. This was the motivation I needed. I decided to go ahead with my plans of starting a live performing instrumental. I was able to secure a Fender Dual Showmen, Fender Reverb unit and a Fender Stratocaster that I needed to get the traditional surf sound.
I placed an add in a free weekly paper that covered the Los Angeles area. In response, Loyd, lead guitar and bassist from North Hollywood was the first to respond. Guitarist Steve Tanner from Covina called. Drummer Dave Rodriguez from South San Gabriel joined up. We all gathered in my garage one February day in 1980. Everyone had experience playing in groups so it wasn't long before we were knocking Wipeout, Pipeline and Baja.
The first public appearance of our band was at a party in Covina in June 1980. We called ourselves The Surf Raiders. After a few gigs, Steve moved, so I called Neal and asked him to join. Neal located sax player, Larry Moore, who also joined us. Larry's appearances with The Surf Raiders really expanded our popularity and surf sound.
Almost from the beginning, The Surf Raiders started recording. Our first record came from a recording session in Neal's front room which consisted of The Curl Rider, an original instrumental surf tune I had penned and a cover Let There Be Surf. It was pretty cool writing and recording an original surf tune. The Curl Rider / Let There Be Surf single was released on our Surf Wax Records label SW-101.
In June of 1981, Larry Moore left The Surf Raiders for other interests. A new saxophonist, Emmett O'Sullivan was recruited by Neal. Shortly after, we recorded our first album Raiders Of The Lost Surf. The songs were a mix of covers and original material. One song, High Wall, was not used but later appeared on a What Surf compilation. Neal then rearranged his tune Point Conception, slowed it down and released it as a single SW-102 titled Point Conception '63. This version did not appear on the LP. They now appear as bonus cuts on this reissue of Raiders Of The Lost Surf on CD.
We thank all of those people who supported The Surf Raiders in the beginning. We made a lot of friends and had great time perfoming during our 15 minutes of fame back then.

From 1980 to 1989 The Surf Raiders were one of the leading bands of the first surf revival, along with Jon & the Nightriders and The Halibuts. To put this into perspective : Pulp Fiction, the film that instantly catapulted surf music back to the sea surface, didn't hit the theaters until 1994. The Surf Raiders, led by guitarist Robert J. "Bob" Dalley (author of the reference work Surfin' Guitars: Instrumental Surf Bands Of The Sixties, now in its 420 page third edition), released three LPs, three EPs, seven 45s, several coloured vinyls and three shape discs. In addition there were two best of's : the 26 track CD Surf Fever in 2009 and The Originals 1981-1988 in 2014. Greek surf label Green Cookie, in cooperation with Bob Dalley and his Surf Wax label, is now re-releasing The Surf Riders' first two LPs on CD, augmented with bonus tracks.

Their 1981 debut Raiders Of The Lost Surf was a fantastic album : a tough and dry "wet" sound that seamlessly picked up the hard line set by the surf bands of the first half of the sixties, full of reverb and with saxophone, a milestone with a mix of covers and selfpenned tunes like The Curl Rider, Surf Raider, Point Conception and Tsunami, indistinguishable from the covers. The only well known cover is Eddie & the Showmen's Squad Car, or can you say off the top of your head who did Scratch, Gum-Dipped Slicks, Pier Shootin' aka Golash or Rampage ? The Ventures, The Original Surfaris, The Intrepides and Rick & the Ravens (Ray Manzarek pré-Doors) respectively. We had to look it up too. As the cover notes stated back then: "authentic surf jams from another time and place", and that still rings true forty years later, maybe even more so. Green Cookie added five bonus tracks to the 13 LP cuts : alternative versions of The Curl Rider, Let There Be Surf and a slower (and longer) Point Conception that appeared on 45, the slow mysterious hypnotic Wailers cover High Wall which to our knowledge only appeared on the 1988 compilation LP What Surf III, and one unreleased track, a slow version of Crash.