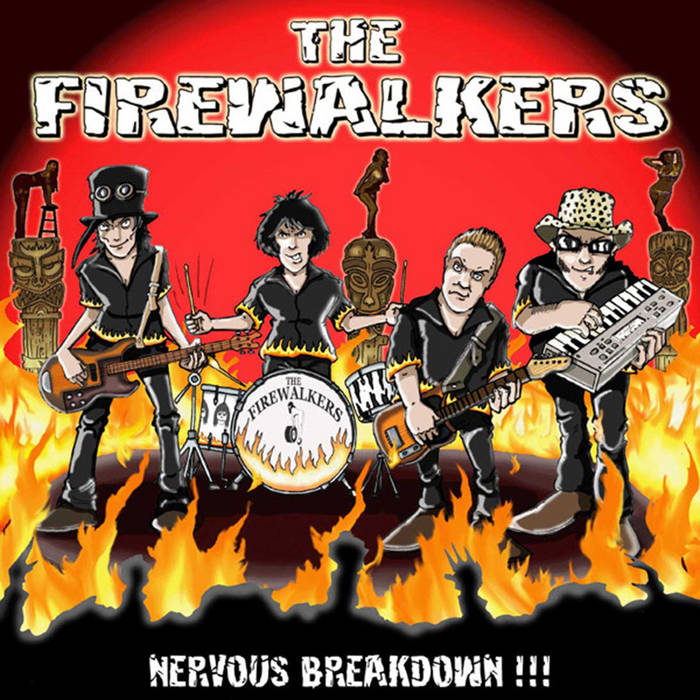 The Firewalkers have been playing hot garage rock for ten years and these cool Frenchmen have set many venues on fire. The four guys dig that goddamn Rock’n’ Roll that The Cramps, The Mono Men, The Nomads, The Sonics and The Fuzztones taught them. They opened for The Fuzztones in April 2003 in Rennes and for Big Boss Man in April 2005 in Lorient. In May 2004, they played in Bourges at the fabulous Cosmic Trip Festival with Los Banditos and The Hara Kee Rees. They had previously released three songs on the Cosmic Trip Volume 3 compilation.

Some records do what they have to do without getting noticed straight away. ‘Nervous Breakdown’ by The Firewalkers is such an album. This French quartet adopts the Green Hornet-formula and adds a bass player. Organ fuelled garage-punk to dance to! About 90% of all other releases in the genre can’t compete with Nervous Breakdown! The Firewalkers’ mission is a successful one. KindaMuzik.net

This foursome plays solid garage rock, with the 60’s sounding organ being the main driving force. Most important of all, this collective radiates more than enough fire to justify the chosen band name. FileUnder.nl

French band The Firewalkers already play together for 10 years, and it shows, since this foursome exactly know what they want. Which is to play garagerock ‘according to the book’. They remind mostly of The Fuzztones. PlanetTrash.nl

The four Frenchies of The Firewalkers make their debut with ‘Nervous Breakdown’ and it’s a clear statement straight away. Garage and surf that’s played in a powerful manner and with loads of fun. Irresistable and this moment’s finest party disc! GonzoCircus.com