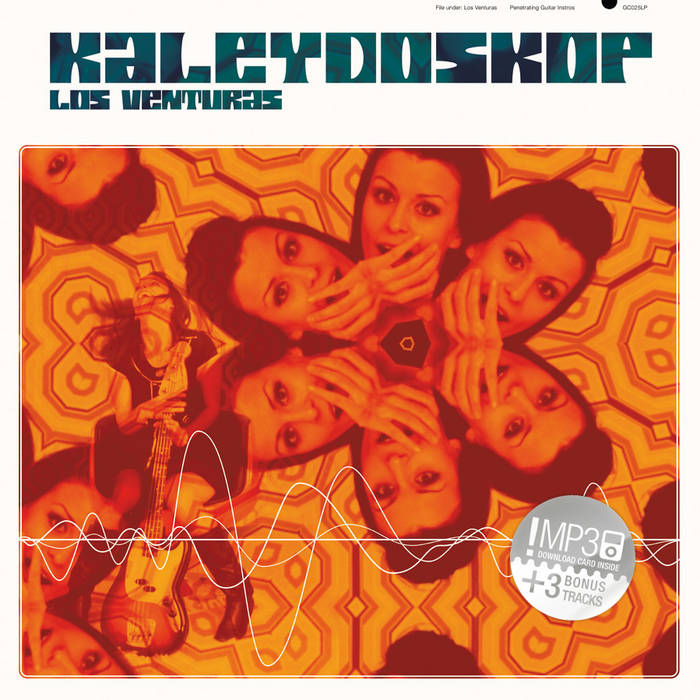 波 Surf Walk in the park is perfect.

All songs by Los Venturas except:
Dizzy by Tommy Roe
Bubamara by Goran Bregovic
Lawrence Of Arabia by Maurice Jarre

‘Los Venturas’ started out in 1998 as ‘Harley and The Revtones’. Playing mostly 60s double-picked instro-tunes they aimed to conquer the Belgian surf scene. The same month they did their first gig, 2 demo-tracks were recorded under the supervising eye of John Blair (!). Sadly these tracks have never been released on CD or vinyl.

By the end of 1999 Los Venturas was formed after a bassist-switch and a change of name, as ‘Harley and The Revtones’ would wrongly be associated with the motorcycle-brand. The new name had to sound fresh, warm, ad-venturous and exotic.

Meanwhile they had found their own sound and started making own compositions. In 2001 they released their first 4-track vinyl-only EP ‘Sharkfest’. A classic in neo-surf.

For their full-album ‘Aloha Summer’, Los Venturas wanted to reach that classic 60s surf-sound. In early 2003 they went on a trip to London to record in Liam Watson’s famous Toe Rag Studio.

Thanks to the brilliant songwriting skills of Thomas Molineaux, Aloha Summer had a strong follower, ‘Surfers Brew’ (2006), an album that mixes ska, surf and a touch of reggae. Mention that all band-members were composing for this album which explains the diversity in styles…
Today they provide a mix of surf, ska, funk, rock-steady, soul, groove, reggae, rai and indierock. The 4-track EP ‘Besame Mucho’ (2007) is the best example of what an instrumental band is capable of… with groovy hot tracks like Theme from P.O.R.N., Met de Vespa op de baan and Rai Uno… they will easily blow your mind.

Touring in Italy, England, Switzerland, Holland, Luxemburg, Germany, France, Austria, Greece, the Czech Republic … they sure have marked their spot in the European instrumental scene. Los Venturas have shared the stage with The Surfaris, The Trashmen, Slacktone, Jon and The Nightriders, Leighton Koizumi (The Morlocks), De Heideroosjes, Bee Dee Kay and The Roller Coaster and many many more.

Currently they’ve finished the recordings of a new full LP in Pete Curry’s ‘Powow Fun Room’, Los Angeles. The LP will contain 8 originals and 3 covers and is called ‘Kaleydoskop’, referring to the variety of styles and sounds in the songs.

“Album title Kaleydoskop refers “to the multitude of influences and sounds that you can find in the songs”, and the track titles also indicate that: Transsibirskaya Magistral has a different connotation than, say, Surfer Stomp. Opener Venturas' Groove typifies the LP: a, er, groovy improvisation to a melody of esoteric guitar sounds with light wah wah. The second track, one of only three covers here, also follows that line: Tommy Roe's Dizzy, aka bubblegum psychedelia from 1969 when the rocking Sheila of 1962 preached love and peace with flowers in her hair. A number of tracks still contain surf melodies, but also hop depup ska, bongo-like drums, funky bass guitar and lots of percussion and guitar effects. A sax joins in on a track or three. Ganja Party is obviously very laid back, 04:52 Uhr Reeperbahn St-Pauli contains dialogue and moan samples from what seems to me an old German porn movie, Revenge Of The Tiki's Part II is their own Taboo. Cinematically I would not call the Venturas sound, but the other two covers are definitely from movies: Lawrence Of Arabia is the Maurice Jarre theme from the 1962 spectacle film of the same name, Bubamara (from the Yugoslav comedy Black Cat White Cat from 1998) combines ska with Eastern European influences but is still fun because of the high kasachok content. Whether the own song Zot Van A has anything to do with last year's Flemish film of the same name is unknown to me. You have to be a bit in the mood for it, but for those who like surf more than just Misirlou, this is quite a pleasant record that opens the boundaries of the surf genre towards psychedelic improvisation. See in that regard also the length of the songs: 52 minutes is quite long for 14 tracks. Venturas' Groove would have been just as good a CD title as Kaleydoskop, because atmosphere triumphs over speed, melody over misplaced machismo. References: The Ventures In The Vaults, The Halibuts, and Austin Powers. It's shagadelic, baby!” --- Reviewed by Frantic Franky (Boppin’ Around)

“Belgian guitar band Los Venturas recorded this set at the Powow Fun Room in Los Angeles with Pete Curry producing, Ron Dziubla guesting on some subtle sax and organ, and Dave Wronski contributing a few “tips and tricks”. Regular readers will gather from this information that Los Venturas are a class act and they will expect a top notch outcome. They won’t be disappointed. This is an excellent album, it has a beautifully clear sound with excellent production that’s matched by a superb vinyl pressing.” --- Reviewed by Alan Taylor (Pipeline Magazine).