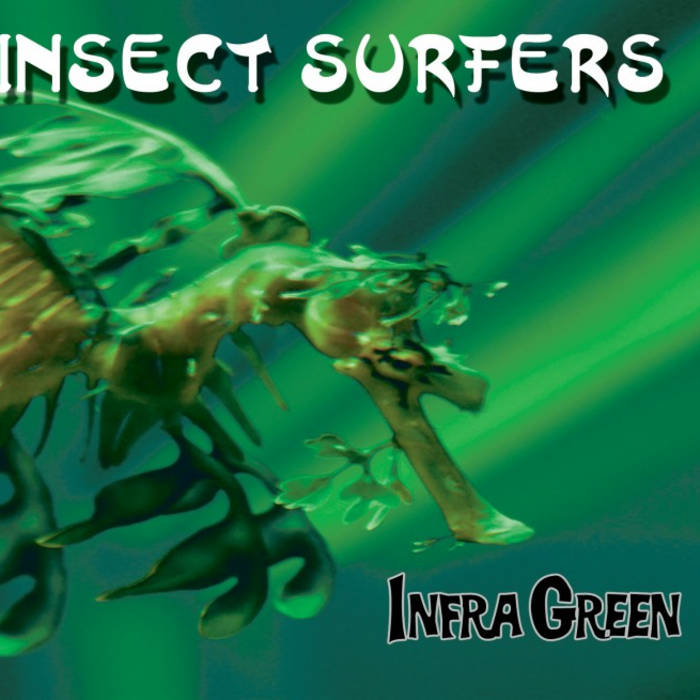 After 10 long years of anticipation, Insect Surfers are back with a vengeance, featuring a stellar new lineup and 15 newly recorded tracks that see them at the top of their game! The new album Infra Green is chock-full of the intricate dual-guitar interplay the Insects have become known for, never losing sight of their characteristic, charismatic and unforgettable songwriting. The psychedelic surf instrumentals uniquely created by founding member David Arnson are brought to life with a renewed vigor, spirit and energy with the help of the solid new lineup of guitarist Michael Abraham (Mads Tolling, Donovan, Space Blaster), Fender bassist Jonpaul Balak, and the return of Death Valley Coastline drummer extraordinaire Jeff Utterback!

Captured by the legendary Steve Refling at Venice's Lincoln Lounge, the album's production is as intense and moving as the Insects' live show, with many tracks being virtual "live" recordings with little to no overdubs, often being the very first take! The album will take the listener on a musical journey unlike any other currently available, through a colorful and vivid sonic landscape of Eastern melodies, outer space encounters, 70s automobile punk, endangered sea creatures, intergalactic Spaghetti Western, Link Wray rock, Morse code grooving, feel good beach lounging, all out electric guitar shredding, peaceful spiritual exploration, and so much more!

Infra Green features 12 brand new Insect Surfer tunes, a re-envisioning of an old D.C.-era tune ("DelMarVa"), a cover of Pell Mell's "Par Avion," and an epic groover that features inimitable guest guitar solos by none other than Paul Johnson (The Belairs, The Galaxies, PJ & Artie, The Packards, The Surfaris, The Duo Tones, Guitars, Inc.), Ferenc Dobronyi (Pollo Del Mar, Frankie & The Poolboys, The TomorrowMen), Jim Thomas (The Mermen, The Shitones), and the king of fuzz himself, Davie Allan!

This surfadelic stereophonic shocker comes pressed up as an ultra limited 300 only green splatter wax variant (the CD and download versions come fleshed out with 4 additional bonus cuts) via the adored Green Cookie imprint and features the latest bad boogie from the Insect Surfers titled “Infra Green”.

On and off since the late 70’s these dudes fronted up by David Arnson have been breaking the surf twang rule book for over thirty years cross wiring the predictable trademark signatures fusing elements of punk and psych to craft out soundtracks for films yet to be conceived yet alone scored.

Amid the riff rumbles gouged amid these grooves the unmistakable signature glide of Will Sergeant albeit appreciably fed speed is evident on the opening power popping surge of “Bay of Bengal” while had Gerry Anderson been western minded as opposed to being sci-fi fascinated then the cool shimmer toning Link Wray meets smoked out Johnny Kidd stylings of “DelMarVa” would have headed up the kind of sonic templates being primed into the minds of the late 60’s kids by Barry Gray.

Elsewhere “Orion Canyon” imagines some secret studio soiree forged by Neil Young and Johnny Marr while those of you missing your one time regular intake of man or astro man grooviness should venture forth at pace to the rampant “Sea Scorpion” ― thoroughly recommended and something that’ll be visited upon again once we nail hard copies.