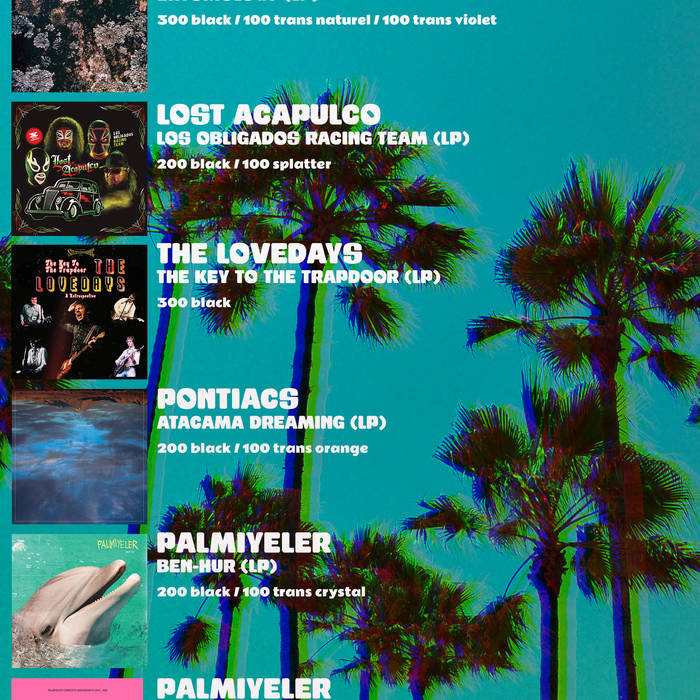 
Entomology’ on Green Cookie Records is a remastered reissue of a 1987 compilation album of the same name by Citadel Records. It contains the A and B sides of their three singles, three songs from their mini-album, and a track recorded just for the album.

Influenced by bands like Pink Floyd (Piper at the Gates of Dawn in particular), King Crimson, early Yardbirds, the Byrds, the Beatles and various blues & psychedelic abands and artists from the '60's, the Moffs, a Sydney band, were around from 1983 to 1989 and they released a whole lot of vinyl on the Citadel label. Their shows were wonderfully laid back - you could easily sit on the floor with your eyes closed and just groove along to their music, or you could take a whole lot of illicit substances and REALLY get into it. They were surreal, atmospheric and groovy; think of jangly guitars, bass guitar octave runs, Farfisa organs and the occasional bells and chimes.


First time on vinyl. Original released as cd in 2011.

Lost Acapulco is a surf rock band formed in the port of Acapulco, Mexico in 1996; One of its main features is the use of Mexican wrestlers masks.
They have a cult status in Mexico. Their live performances are powerful and dizzying; the audience transforming them into frenetic and colorful tribal dances wearing wrestlers masks, flowered shirts and beach accessories; paraphernalia which little by little have been incorporated to the shows by the fans.
Their tracks have been included in films of the "new Mexican cinema", such as Sexo, Pudor y Lágrimas, Perfume de Violetas, Atlético San Pancho, Matando Cabos, Santos Peregrinos and in animations by Jorge Alderete for MTV and Nickelodeon.


Back in the heady days of 2007, long before social media was the reigning king of entertainment, when people still picked going out to live shows over streaming movies, there was a band that made a little blip on the heart monitor of the Medway music scene before disappearing almost as quick.
The Lovedays were a British pop band, in the retro meaning of the word "Pop". With influences ranging from Brian Wilson and The Who, to Steve Winwood and Roy Wood, The Lovedays aspired to be part of the next generation of classic pop purveyors.
Their eponymous debut received 5-star notices as far afield as the US, with only self-distribution and promotion, along with noted appearances at The Cavern Club in Liverpool and Kennys Castaways in New York in 2009.
They took hiatus in 2010, for pastures new. Ben Jones, the frontman and leader of the band, moved to Austin, TX, where he is part of the roots duo, Beat Root Revival.


It was year 2013 and the neo-psychedelic rock scene of Santiago de Chile’s was reaching its highest point. After releasing two albums that went from a primitive and urgent garage rock to a more elaborated space rock, Pontiacs, came through with their new self-produced album, “Atacama Dreaming”. Nine songs about the nature through its different dimensions, based on reverberant and repetitive melodies of space rock, dream pop and neo-psychedelia that give form to the most detailed and polished release of the band, which has not been officially released until now. Seven years later, Green Cookies Record presents it to the public in LP format, doing justice to a work that deserved more recognition than it had original received.

Palmiyeler invites you for a drink by wavy beaches where you can enjoy their fun-psych-surf-pop sounds with serious lyrics darken by Istanbul’s genuine chaos. Founded as an Istanbul based garage rock trio comprised of lead vocalist/guitarist Mertcan Mertbilek, bassist Tarık Töre, and drummer Rana Uludağ. They recorded their debut 'Palmiyeler EP' in 2013 and released on vinyl and all digital platforms in 2015. After the release guitarist/keyboardist Barış Konyalı has joined the band. They spent time touring, making videos and recording their debut album II (Venus) with the singles 'Senden Haber Yok' and 'Karbeyaz'. The LP is released by Tantana Records in 2017 as a limited edition LP and through all digital formats. Palmiyeler released their 2nd studio album Akdeniz including the lead singles 'Derine' and 'Kalbim Seni Arar' on May 25, 2018. The band is recording their 3rd studio album now.