by The Bash Dogs 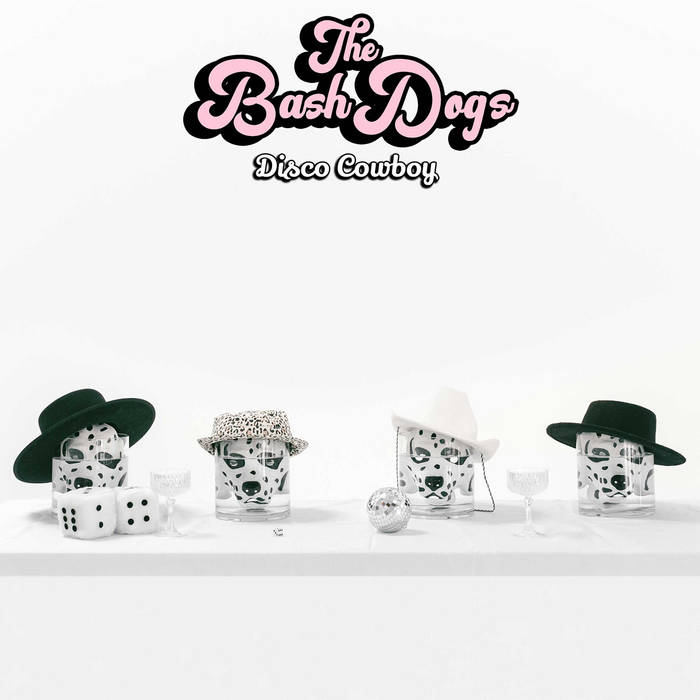 Cheers to the years! A spirit of exploration, of love and unity - a musical philosophy Los Angeles quartet The Bash Dogs keep alive with their surf disco (*), but also their pure devotion to the art form. After cementing their status as the hosts of the grooviest party in town, The Bash Dogs are gearing up to release their debut album. With a new member, a new vibe, and new songs made to get people moving and grooving all night long, the next chapter of the Dogs starts now.

As the Dogs’ realized their talents could expand far more than just 12 bar blues and guitar solos, they decided to develop something new. Coming from the city where surf/garage/psych bands are never in short supply, the last few months had felt repetitive and stale, like the band was idling. Trying on some dance-floor rhythms and sugary bass lines more influenced by classic funk and disco, their sound transformed. With the spark of this newfound energy and the space to push their songwriting and playing to new levels, Surf Disco was born.

As you can taste bits and pieces of the classic and memorable rock n’ roll sound the Dogs grew up on, this newborn fusion they have created is guaranteed to get you off your feet and it is reflected in the sophisticated groove changes and experimental structure of 2020 single, “Dog Days”—funk guitar and buttery vocals pointing to a refined, more mature sound that the Dogs are ready to further unveil. As soon as the unmistakable groove and the synth waves hit you, there’s no denying it’s slicker, it’s glossier, and it’s the perfect soundtrack for “boogie nights and disco parties.”

“There are bands that take classic rock and follow it by the book. Ironically, this is the epitome of what rock stands against – the anthem is do your own thing and forget what anyone else thinks. Then, there are bands who take classic rock and add their own spin. They have fast paced, make-you-move instrumentation with fresh, sometimes soulful vocals, but leave plenty of time for that shredding guitar solo that made them fall in love with rock ‘n’ roll in the first place. That is The Bash Dogs.” --- Creative Control Magazine

"The Bash Dogs sound like they walked from a stage at Woodstock to The Roxy (they actually walked onstage wearing Dalmatian masks, but close enough). In the generation where everyone plays alt rock, they don’t. Their style is clean, loud and pure classic rock." --- That's Why We Musyc

"To classic rock fans, it’s six songs of comfort food, with some tastylicks from singer-guitarist Nate Barrett and some big grooves from bassist Schmok. And while it’s next to impossible in this era to make classic rock sound fresh, the trio gives it a shot [...] Their sheer power and rawness put them in league with other garage-rockers who serve up antidotes to all that is overpolished. Bash your heads accordingly." --- BuzzBands LA


"This is sheer brilliance in songwriting, execution, and production. Though the quality here should stand beyond comparison, to overlook the Jim Morrison style of Nate’s vocal delivery would be admittedly ignoring the elephant in the room. On that note, The Bash Dogs could somewhat be likened to an alternate-history revisioning of the Doors, but certainly not limited to them, and that’s only part of the story." --- JamSphere

“The half-Korean brothers Nate and Jeremy Barrett started the band back in high school. After years of building their following and honing their sound, The Bash Dogs are celebrating with a 10-song dancy, funky LP that will also be pressed on pink vinyl.” --- What Youth