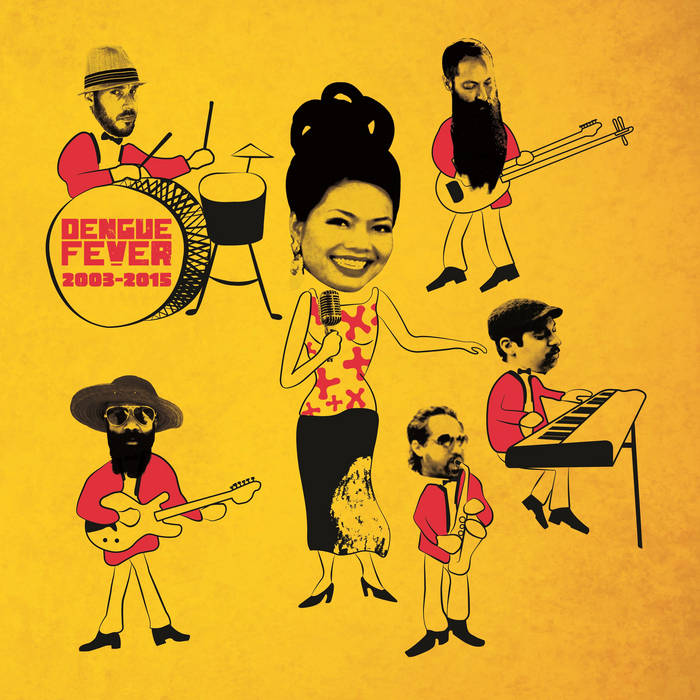 Dengue Fever is what happens when musicians are record collectors, travelers, revivalists and extenders of tradition. Instead of simply falling in love with music that was literally almost eradicated, Dengue Fever helped nurture it back to health and propel it into the future.
I first heard Dengue Fever in the mid-2000’s, and I’ve been lucky enough to present them in NYC at Joe's Pub at the Public Theater, Lincoln Center Out of Doors, and globalFEST, also in the the United Arab Emirates at The Arts Center at NYU Abu Dhabi (basically, where I go, they go...) to large and diverse first-time audiences. Each time, I watched crowds transfixed by Dengue Fever's unfamiliar yet familiar sound.
At the inception of the band, they drew from the classic psych-surf repertoire of artists like Sinn Sisamouth and Ros Serey Sothea, whose modern, globalized musical visions made them targets during the Khmer Rouge genocide. Dengue Fever introduced this nearly lost music to a new generation of fans in the US and eventually returned to its birthplace in Cambodia. However, they didn’t stop there. With love for the music and respect for a culture that belonged only to singer Chhom Nimol, they soon developed their own original songwriting and innovative sound that could only have been born in Southern California.
Like the Cambodian artists who gave them inspiration, they understood that pop music is a hybrid. Just as American rock was refracted within the sounds of Phnom Penh during the 60’s and 70’s; Dengue Fever sent the music back through the looking glass of indie rock, Ethiopian jazz, and trans-national psychedelia. They’ve become unlikely ambassadors, bringing their music around the US and the world. Enjoy this album, which captures a singular artistic voice that could never be mistaken for any artist other than Dengue Fever.

On his now legendary six-month trip around Asia back in the late '90s, Erhan Holtzman hopped on board one of the ubiquitous Cambodian Tuk Tuks and was treated to the driver's choice of music: the scuzzy psychedelic surf-rock of pre Khmer Rouge Cambodia. He returned home with a case full of cassettes. The rest, as they say, is history, including the hard-fought recruitment of the Khmer chanteuse Chhom Nimol, who completed the Dengue Fever line-up, and the move from covers of classic Cambodian pop to the development of new material, both authentically Khmer, and classically Californian.

This album is a pick of some of the best loved tracks by the outstanding six-piece ensemble, documentaring their first 12 years and released on limited edition vinyl and available for download. If you love hypnotic global grooves and don't already have Dengue Fever's back catalogue, then this is a timely and perfect way in.

Featured sounds by K.Spark and WIZDUMB, plus Basi joins the show to discuss his latest release.